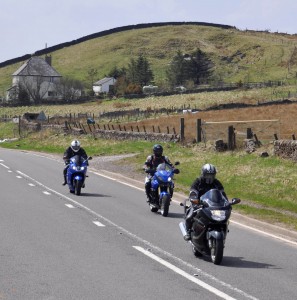 Riding a motorcycle amongst a group of others, be them friends or relative strangers has many positive aspects to it, not just socially but also with regards to staying safe & looking after the rest of the bunch.

When riding within a group as part of a ride within a group then it is usual to have some form of plan or preparation, be this a predetermined route or a friend who can act as leader to direct others, usually the most experienced rider or one with some form of advanced skill.

The simple aspect of planning of a route and having some basic riding roles is then distributed to the riders within the group so that everyone knows at least what to expect and where they need to go is certainly going to make sure the group rides a lot safer & without complications.

There are many techniques possible for group riding

There are 2 commonly suggested methods for group riding which i’ve highlighted below.

In many instances, especially when there has not been any such system adopted, there is a tendency for the riding group to get disconnected and this leads to riders either using excessive speed in order to ‘catch up’ the other riders, or riders focussing their attention only on the rider in front and not on the road and other vehicles further ahead.  Another common issue with group riding, especially with larger groups in higher density traffic areas, is that the ‘tail riders’ may get caught up behind traffic and result in riding at slower than normal speeds. This may lead to frustration, which then may lead to mistakes being made or excessive speeds trying to catch up a lead group again. There is no golden rule to the optimum number of riders that should be within each group, however it should be manageable by all parties. This would largely depend on the group riding experience of the individual riders within the group. General advice would be; if you have inexperienced group riders within the group, then keep the group quite small, certainly below 8 – 10 riders.  When there are a lot of you together, if necessary split into smaller groups or individual packs of half a dozen, if there is a lot of you riding each pack having a pack leader with 4 or 5 others in each pack can help organisationally. One very important thing to remember is that each individual rider is and should be responsible for their own actions and safety.

Regardless of the system used in an organised ride, or whether you are just going out for a ride with a group of friends, always try to have a pre ride briefing to cover:

Also have contingencies for road side recovery such as one of your group having access to a van or trailer that can carry a bike or knowing someone who can be on hand to help at home if required to come to the rescue. Failing that a credit card or sufficient money in case you need to pay for repairs or recovery.