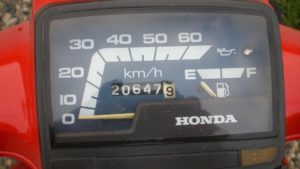 Ever dreamed of owning a Honda Supercub but didn’t fancy the small 50cc or 90cc engines? Well fear not. The Honda Supercub (or as it as affectionaly known, “the bog seat” due to the nature of lifting the seat to fill up with fuel & it resembling a toilet) is back & this time with a bigger engine & underpinned with modern details such as front and rear disc brakes with ABS, analogue / LCD dash, keyless ignition with a button which makes the indicators flash and full LED lighting..

The Supercub was once the commuters choice of solo transportation that was no more costly to go to work on than going by bus without all that waiting around.  Many bikers also favoured them as a winter hack to keep the summer sports bike in pristine condition.  It has been sold all over the world for 60 years to become probably the greatest motorcycle of all time, selling something like over 100million since Honda stated making them.  This latest model  has been available to buy in Japan for a while but now it’s coming to the UK.   Mostly the original was successful because it was affordable and very a reliable little bike to get around on that was practically indestructible & could pretty much get you around the world before it needed to see a mechanic.  The bike has become a classic in its own right. The new version has the unmistakable retro look of the original but updated for the modern world but still remaining are the enclosed chain drive which means minimal cleaning & maintenance required. It even has a retro Honda logo on the side just like the previous generation Super Cub.

Many riders have learned to ride on Honda C90’s & C50’s (some just by thrashing around on one across the fields as a teenager) & they always were a very easy bike to learn on.  Many young riders found them easy to ride around cones or obstacles as opposed to a moped which has much smaller wheels & very awkward handling by comparison or a larger 125 which often meant a jump in insurance costs or compromising low speed handling for some additional street cred. I’m sure this new incarnation will be just as good to learn on & with it’s bigger engine size & it should also appeal to anyone seeking a retro scooter.

From MCN
Honda have unveiled their new Super Cub C125 at the Paris and Intermot motorcycle shows, with machines expected to arrive in dealers this autumn.

Priced at a competitive £3399, this latest Cub marks the 60th anniversary of the iconic name, offering similar styling to the original bike, alongside modern technologies such as LED lighting and a Smart Key system.

Using a semi-automatic 125cc engine housed in a durable chassis with long travel suspension, it could be the ideal modern retro scoot for inner-city commuting.

Over 100 million Super Cubs have been built by Honda in the model’s 60-year history; nose-to-tail, that’s enough to circumnavigate the earth five times.

“We know our customers, male or female, take their personal style seriously and we want our new Super Cub C125 to enrich their lifestyle,” said Mr Tadamasa Maeda, Large Project Leader for the Super Cub C125.

“Its timeless design expresses value and universality, and we have added a new level of performance to the engine and handling ability to the chassis.

“Just like it was for our founder, our biggest joy is to play a positive part in daily life – and also put a big smile on the face of every Super Cub owner whenever and wherever they ride it.”