What an absolutely fantastic event at LDC in Burton.. the weather was perfect, the barbecued food was perfect & the people who attended were also making this a perfect event for all.

We had 2 special guests scheduled to attend,  BSB rider Shaun Winfield (2nd from right) and round the world record breaking explorer, Rhys Lawrey (left) & a surprise guest for the evening was, BSB star & former MotoGP rider James Ellison (2nd from left) who turned up with the McAMS team. Even Staffs Biker’s very own Kevin Wilcox (right) became a TV star for the evening as BBC Midlands today also attended & interviewed Kevin live on their 6.30pm broadcast & featured the event to talk about road safety for riders under 25 & the suggested changes planned for the CBT test process. 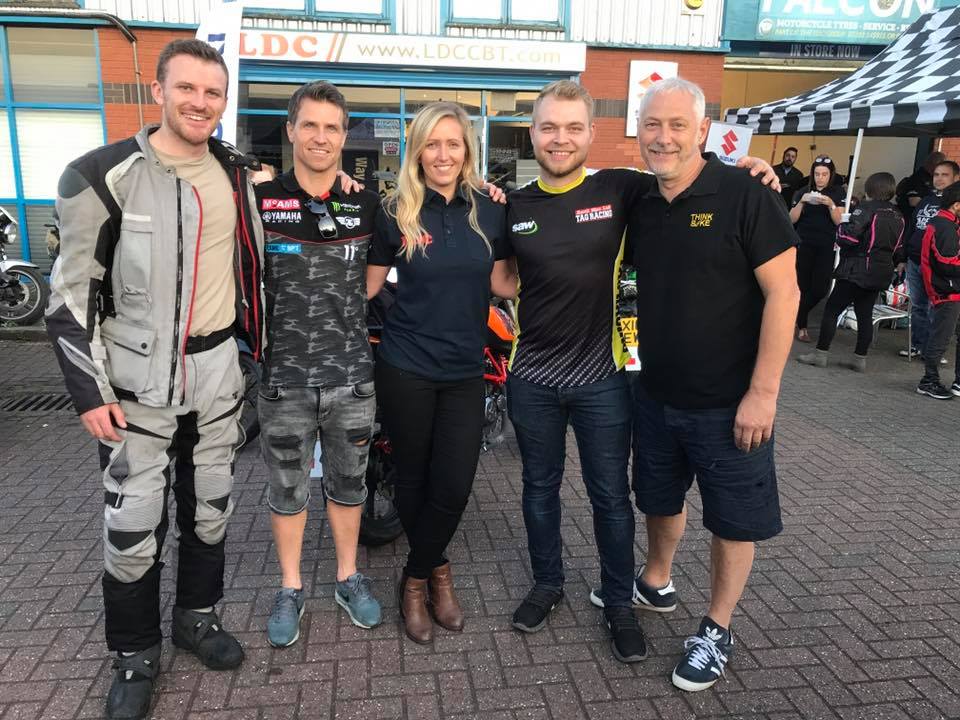 LDC in Burton on Trent proved to be a great location. The attendance was above expectations so we’d like to thank everyone for attending the event & especially all the crew at LDC for hosting a memorable event & our special guests who all took the time to talk to everyone who helped with the event & mingle in with the people there who attended.

Many young riders were entering in the spirit of things by sharing their tales & experiences of biking plus talking part in the (now familiar to bikers breakfast regulars), Buzzwire contest to win a “Think Bike” mug . Also a £50 voucher could be won on the night with other competitions such as a highway code quiz & those who attended who have the Biker jack app installed were also entered into a prize draw if they provided proof they had downloaded the app.

Although we launched or “Where’s Jack?” competition on the last Bikers breakfast event, we gave it a proper sensational launch at the bikers barbecue & everyone it seemed wanted to get into the action & have their photo taken wearing one of the facemats..  Plenty of people getting into the spirit of things having selfie’s taken with friends or on one of the stands.

Even James Ellison got involved & the former AMA superbike, MotoGP  & World endurance front-runner became “Ange” the angel for a photo opportunity (shown here). Could we be about to launch a new competition category for Best celeb pictured wearing a facemat? Watch this space.

Rhys Lawrey also had a go on the Buzzwire but couldn’t compete it without losing 3 lives, but when he (jokingly) was told his prize to complete it would be a copy of his own around the world DVD, he decided to have another go but still couldn’t complete a faultless attempt – maybe riding around the world on a bike is just something he finds easier.

Here are a few photo’s from the event.  More as & when we get them can be found on the Biker Jack facebook page