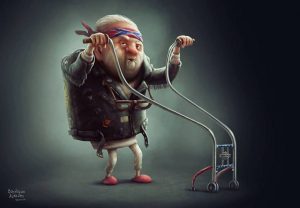 Many people today are asking where they fit in socially, however I have to wonder if motorcycling is still attracting the young.  Many seem content to play on their smart phones or games consoles on games where you can ride bikes on the track or on the road, but when it comes to doing it for real it doesn’t perhaps seem as appealing to the younger generation as it once did.  Licensing changes, changes in the test process, the cost of insurance, the anti biker attitude of the lawmakers & the socially unacceptable image among some parents are probably putting the younger generation off motorcycling as a hobby or way of transportation.  In addition to this, the focus on heath & safety where anyone considering doing anything considered “dangerous” are put off by the legislation & scare stories in the TV news & media.

In terms of sport, i’m also a little concerned that motorcycle sport doesn’t seem to be bringing the younger generation of talent through the ranks today; so it may be a long time before we see another world champion coming through.  The British speedway scene at the moment has probably the most successful young British motorcycle rider of our era, multiple FIM World champion, Tai Woffinden, however he was born in the UK, then raised in Australia where youngsters are able to ride bikes more openly than here in the UK & the extreme sports more mainstream & encouraged.  There is a lack of young British riders in the top Speedway leagues & entering things like the MotoGP feeder series etc. The British & World superbike championship, the TT etc is full of British talent, however many are riders who have been competing for 10 or 20 years & are probably (with respect) beyond their peak & wouldn’t be able to compete with the younger talent coming out of Spain or the commonwealth nations which have invested & encouraged motorcycles more. Many riders of my generation & before it, learned to ride bikes on the unusable farmland, disused woodland areas or in abandoned quarries etc on dirt bikes as school children, These days it seems youngsters can’t go “on the fields” like they did in the past to learn how to ride a motorbike at an early age due to farmers or landlords being less persuasive to let people use their land for pleasure & of course fears of complaints about noise & health & safety etc & finding a place to take a bike to practice or learn such as a private track or open land welcoming bikes seems to be an uphill task.

Is biking becoming less cool for kids? Youngsters of course are probably more drawn into car culture because the appeal of a heater, taking your fiends with you & having a loud stereo are probably more appealing than being cold, alone & persecuted by the law & the NIMBY (Not in my back yard) brigade who are anti bikes & of course temptations such as games consoles & electronics have a natural appeal to youngsters.  It may surprise you to know that if more of us took a journey to work on a bike, Congestion would reduce by a third, rush hour road speeds would increase as a result as less people would be sitting still in a queue & more people would be able to use the roads, so taking up biking makes more sense when the daily commute consists primarily of one single occupant in each car on the trip to work & financially, running a small motorcycle is a fraction of the cost of driving a car & if you want to go to a track & experience Ferrari type performance on a budget, 2 wheels can provide the answer.

If you are a young rider or perhaps a school pupil considering taking up motorcycling in the future, or maybe a parent who has kids who are tempted by motorcycling, let me reassure you, it’s a great way to make new friends – certainly better than hanging round on street corners & the sensation of freedom of being on a bike can’t be equalled & once experienced becomes the only drug a young person will ever need – & best is it’s all legal!. There is a lot of help & encouragement available such as the Biker Jack App & the Staffs young riders website, which will be there to put your mind at ease as well as the mind of mum & dad who perhaps have questions.  Staffordshire has to be one of the most biker friendly counties in the country & with this in mind, also provides many solutions to help & encourage younger riders to get the best out of the support provided.

As for our sporting heritage, it may surprise you to know that Motor sport is probably the only division of sport in the UK not to receive state funding of any type.. as a schoolboy you certainly couldn’t take up Grasstrack racing as an after-school activity & it’s certainly not taught as a sport in PE lessons or the college system & unlike many sports taught in schools etc the Government don’t have any financial input in any way (primarily as it’s seen as non environmentally friendly, so the tree huggers would complain) so Motorsport is supported 100% by the private sector. a bit sad really as over  the years we’ve had a lot more success in Motorsports than in the school yard sports such as Football, Tennis etc where £billions of funding have been spent on our sporting legacy, so do we really want to see youngsters discouraged from motorcycling in the 21st century?

Maybe you have thoughts & ideas on this & perhaps some ideas of how to encourage youngsters into bikes. We’d love to hear them, get in touch & tell us.